Lady Falcons undefeated in conference play, ranked No. 1 in state 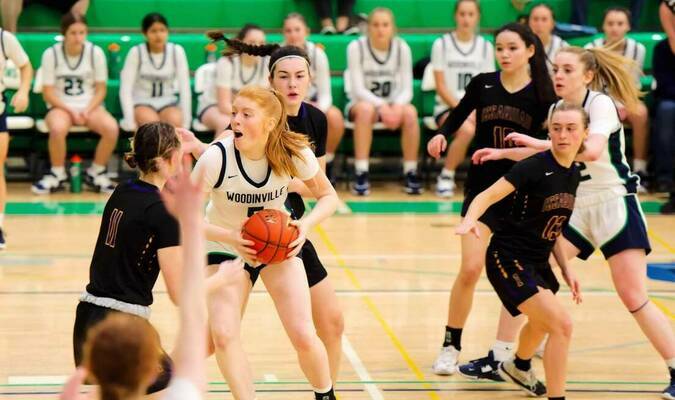 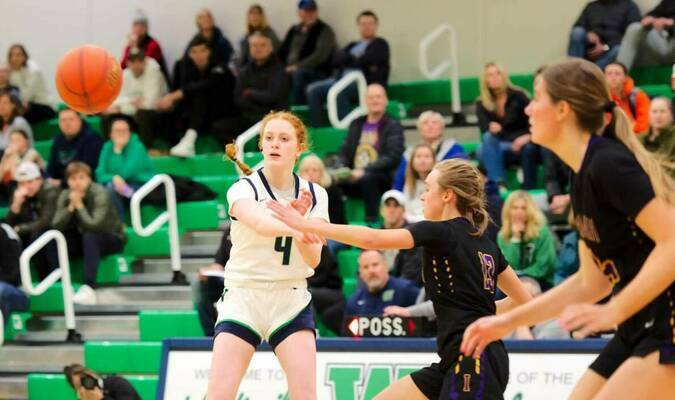 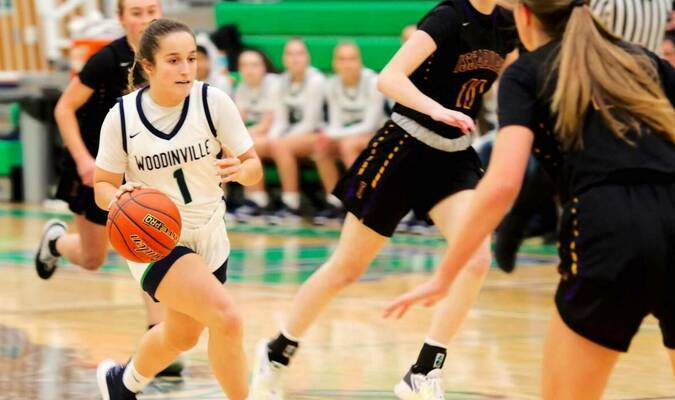 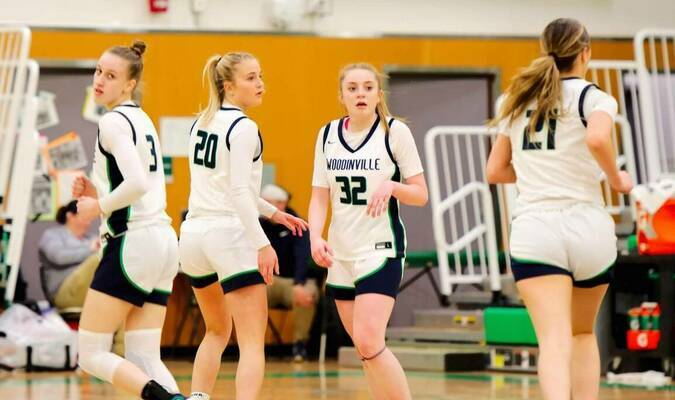 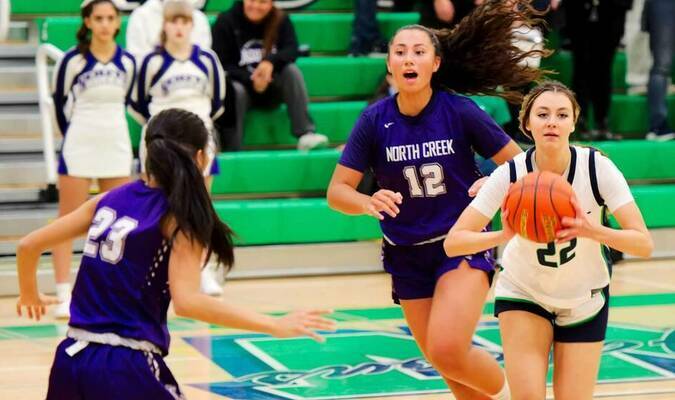 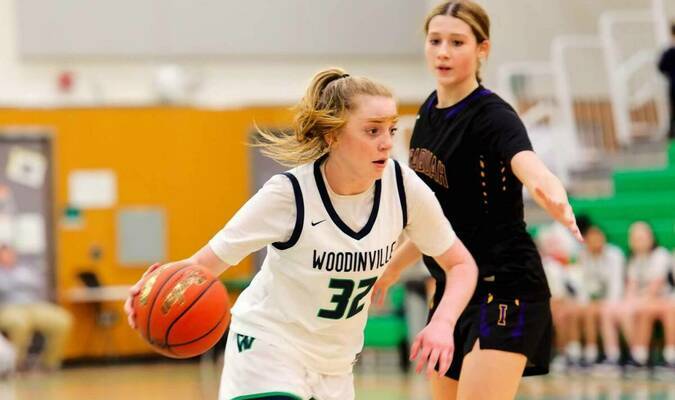 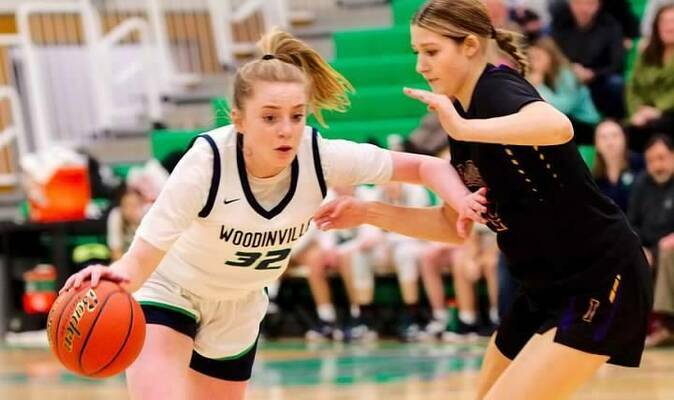 Photo by Tushar Agarwal. Brooke Beresford pushes the ball up court against Issaquah. 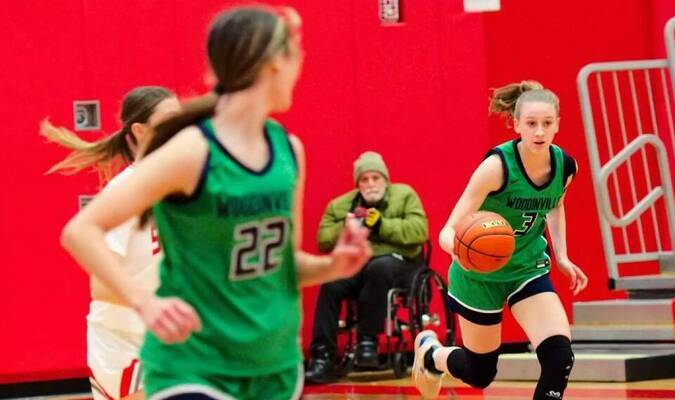 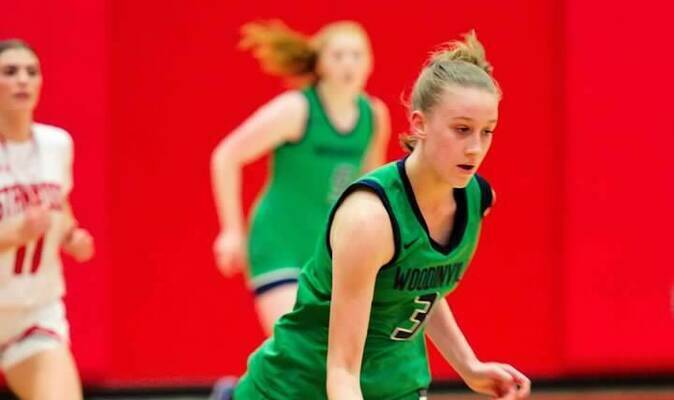 Since their loss to Lynden Christian on Dec. 10, the Woodinville girls’ varsity basketball team has won nine games in row, including their last three, all district wins against 4A KingCo. rivals Issaquah, Mount Si and North Creek.

Woodinville came out strong off the tip, taking an early 16-11 lead through the first quarter. After that, they never trailed again. At the half, the Lady Falcons extended their lead to 33-22. Woodinville outscored Issaquah 27-21 in the second half to escape with a 60-43 home conference win.

Brooke Beresford and Jaecy Eggers led the way with 16 points a piece, including 12 and 10 rebounds respectively. Lyla Kahrimanovic nearly had a triple double with 11 points, 10 rebounds, and a team high eight assists.

Mount Si surprised the Lady Falcons with a 33-32 half time lead behind the strong play of Mount Si freshman Zada White. The inspired Falcons came out dominant in the second half, outscoring Mount Si 39-19 in the conference road win.

“Sophomore Hailey Quiggle was the real difference-maker though, knocking down a season high five 3-pointers on her way to a 17 point night,” Bullock said.

The Lady Falcons came out of the gate a little slow against North Creek, which found them in a 26-26 tie at the half. North Creek was led by Mia Hammerquist, who hit five 3-pointers in the first half.

Woodinville came out pressing in the third quarter, going on a 22-5 run to put the game away.

Quiggle hit four 3-pointers, all at clutch times. Eggers led the way with 19 points and eight rebounds. Senior captain Brooke Beresford had a team high eight assists, along with 14 points and 12 rebounds.

Beresford leads the Lady Falcons with 16.5 points a game. She leads the team with 42% from behind the arc, having hit 21 of 50 3-point shots. Her 76 assists and 33 steals are tops for Woodinville.

Eggers is averaging 14.8 points a game, and is tied with Beresford with 121 total rebounds. She is shooting 49% from the floor, including a team high 36 blocked shots.

Kahrimanovic averages 13.5 points a game, including 98 rebounds, 60 assists, 28 steals and 17 blocked shots. Her 48% field goal percentage ranks among the highest on the team.

Jazlyn Wilkerson’s 7.8 points per game is fourth on the team. Wilkerson is shooting 42% from the field, including 45 rebounds, 21 assists and 19 steals.

Woodinville sits atop the 4A KingCo. Conference with a 7-0 conference record and a 12-1 overall record for the season. The WIAA ranks the Lady Falcons No. 1 in the state.

As a team, Woodinville averages 70.4 points a game. The team is shooting 46% from the field and 29% from behind the 3-point line.