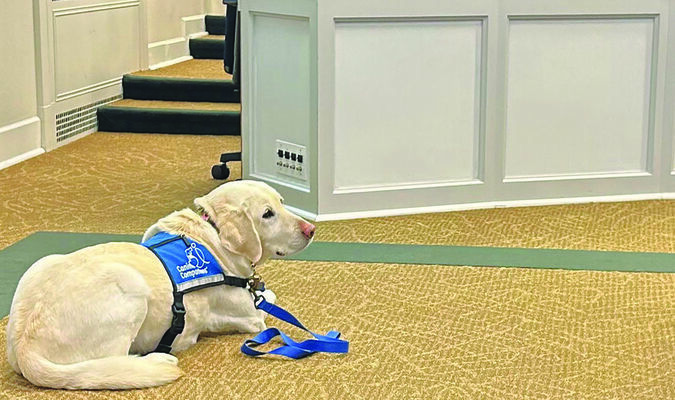 Courthouse dogs were on hand in Olympia as rules surrounding their appearance in court are clarified in a proposed bill in Olympia.

Four dogs sat in a House hearing room and two more watched the room over Zoom as a legislative committee discussed rules dog handlers must follow in courthouses for dogs to assist people who are providing testimony, including youth with disabilities.

“I can’t say how amazing these dogs are when something bad has happened to your kids, my kids. Really, they’re our kids. All these kids belong to us,” said Ellen O’Neill-Stephens, founder of the Courthouse Dogs Foundation. “To be able to provide this link from the dog to the child when the child is in stress makes all the difference in the world.”

For instance, if a witness is under the age of 18 or has a developmental disability, the bill outlines how courts may allow a dog for testimony, Burzynksi said.

Sue Bucy, Executive Director for the Center for Healthy Families, brought her courthouse dog, Louis, to the hearing.

Louis sits with children when discussing physical and sexual abuse, and goes to therapy with children as well, Bucy said. Recently, a young girl was ready to go to court, but told her therapist she would go only if Louis went with her.

O’Neill-Stephens said courthouse dogs can help with investigations and the prosecution of crimes. She has testified in favor of changes to current law in two previous legislative sessions, and said she hopes the modifications will pass this year, she said.

The second time the bill was presented, it went through the Senate and was passed quickly before being sent to the House, she said, but, it was never approved by the House.

The bill, HB 1077, was presented by Rep. My-Linh Thai, D-Bellevue. The committee voted unanimously to move the bill forward.